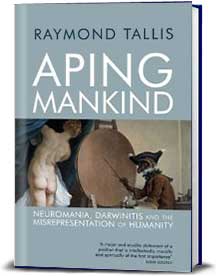 Tallis is a neuroscientist who is appalled by the exaggerated claims made for the ability of neuroscience and evolutionary theory to explain human consciousness and behavior. He offers a powerful critique of the materialist theory that we are our brains. Tallis does not write from a religious point of view, but as a secular humanist.

"A terrific book, though readers must be prepared to read it at least twice, not because it is in any sense obscure, but fully to appreciate the richness and subtlety of Tallis's novel insights, with all their implications for our understanding of humanity's precious attributes of freedom, intentionality and moral responsibility."
- James Le Fanu, The Tablet

"A trenchant, lucid and witty attack on the reductive materialism of many scientific accounts of consciousness - not from a religious point of view, but that of an atheist humanist with a distinguished record in medicine and neuroscience."
- David Lodge, The Guardian's Books of the Year 2011

"Neuroscience, we are implausibly informed by white-coated Simon Baron-Cohen, will help dispense with evil. Who better to debunk its pretensions while instructing us in its uses than wise, literate Raymond Tallis, a neuroscientist himself, in his entertaining Aping Mankind."
- George Walden, Evening Standard's Best Books of the Year