Exploring Frontiers of the Mind-Brain Relationship 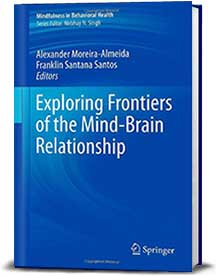 This thought-provoking volume argues against the purely physical analysis of consciousness and for a balanced psychobiological approach. It bridges philosophy of mind with science of mind to examine transcendent phenomena empirically, such as mystic states, near-death experiences and past-life memories, that have confounded scientists for decades. Representing disciplines ranging from philosophy and history to neuroimaging and physics, and boasting a panel of expert scientists and physicians, including Andrew Newberg, Peter Fenwick, Stuart Hameroff, Mario Beauregard, Deepak Chopra, and Chris Clarke the book rigorously follows several lines of inquiry into mind-brain controversies, challenging readers to form their own conclusions--or reconsider previous ones.

"Exploring Frontiers of the Mind-Brain Relationship is an important contribution. It provides a balance of the purely physical analyses of consciousness with the psychobiological. In this way, it attempts to bridge mind philosophy with science. It empirically examines transcendent phenomena, such as mystical altered states, near-death experiences, end-of-life, mediumistic experiences, and past-life memories. Consequently, this book's 12 chapters confront the hard scientific dilemmas, and its cast of scientists should be commended."
- Vernon M. Neppe, Pacific Neuropsychiatric Institute, Journal of Parapsychology Vol. 77, no. 1., Spring 2013

"Although dogmatic materialism is the monarch of contemporary Western philosophy and science, contributors to this splendid book remind me of the brash lad in the classic fable who shouted, "But the emperor has no clothes!" Some readers will agree with this observation while others will find it an outrageous heresy. But as they wend their way through each articulately stated and meticulously argued chapter, they will never succumb to boredom. It is the type of book that will haunt its readers long after the last chapter is read."
- Stanley Krippner, Ph.D., Professor of Psychology, Saybrook University