Science and Psychic Phenomena: The Fall of the House of Skeptics 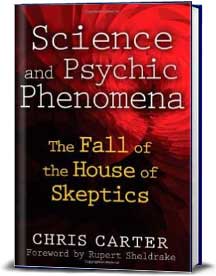 Reports of psychic abilities such as telepathy, clairvoyance, precognition, and psychokinesis date back to the beginning of recorded human history in all cultures. Carter shows that replicable evidence of psi phenomena exists. The controversy over parapsychology continues not because ESP and other abilities cannot be verified but because their existence challenges deeply held worldviews. Carter reveals how the doctrine of materialism -- in which nothing matters but matter -- has become an article of faith for many scientists and philosophers, much like the convictions of religious fundamentalists. By outlining the origin of this passionate debate, Carter calls on all open-minded individuals to reach their own conclusions by looking at the vast body of evidence.

"Chris Carter is a one-man wrecking crew for the time-worn, tedious, petulant, and often flimsy complaints of the die-hard skeptics. A science of consciousness is doomed to be incomplete without taking Carter's keen insights into account."
- Larry Dossey, M.D., author of Healing Words and The Power of Premonitions

"The controversy surrounding psychic phenomena (psi) is both long and complicated. Chris Carter reviews the many elements of the controversy in great detail, but in a manner that is also readable and entertaining--a difficult feat. I found his explanation of quantum theories of psi, for example, exceptionally clear, and it resolved some confusion I had about these theories from reading other sources. Carter adheres strictly to valid scientific and philosophical principles in arguing for the reality of psi and the legitimacy of parapsychology as a science--no retreat into New Age metaphysical mumbo jumbo--and he doesn't overstate his case. Any reader who can approach this controversial subject with an open mind will find Carter's book immensely rewarding."
- John Palmer, Ph.D., editor of Journal of Parapsychology

"I highly recommend this book to anyone who is truly open-minded about whether or not psychic abilities exist. Chris Carter takes the reader on an insightful journey that weaves together history, scientific data, modern physics, psychology, and philosophy of science. He convincingly shows that it's now possible to replace belief-based opinion with solid science when discussing the possible reality of psychic phenomena."
- Jessica Utts, Ph.D., professor of statistics, University of California, Davis