Supernormal: Science, Yoga, and the Evidence for Extraordinary Psychic Abilities 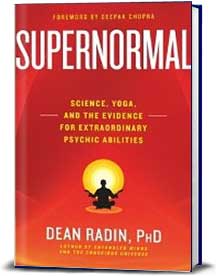 Dean Radin, one of the world's leading experimental parapsychologists, explores whether yoga and meditation can increase our inherent mental powers, and summarizes experimental evidence for telepathy, clairvoyance and precognition.

"In Supernormal, consciousness researcher Dr. Dean Radin shows compellingly that specific ancient claims about extraordinary psychic abilities are real, and how they have been confirmed by an outpouring of ingenious experiments whose statistical power is simply galactic. Supernormal is the crown jewel in Dr. Radin's landmark trilogy, which also includes The Conscious Universe and Entangled Minds. Supernormal is a reader's delight. Beautifully written, it is spiced with that rarest ingredient in science writing: humor. If this book does not take your breath away, it should, because it reveals how we can awaken to innate human potentials that are glorious, on which our future may depend. Thank you, Dr. Radin, for showing the way."
- Larry Dossey, MD, author of One Mind

"In the last 50 years, major discoveries in modern science increasingly support the wisdom and vision of the ancient philosophers and sages. Dean Radin's work is a major step in the same context, showing us how the statements made by the ancient sages like Patanjali are supported by the current research conducted with strictest scientific protocols. Radin's work seems to bear even greater promise of what is yet to come."
- Swami Veda Bharati, D. Lit.

"As with Dr. Radin's previous work, this book is thoroughly researched, clearly written, and immensely engaging. Once again he has pushed the boundaries of religion, science, psychology, and philosophy. Invaluable reading!"
- Michael Bloch, University of San Francisco