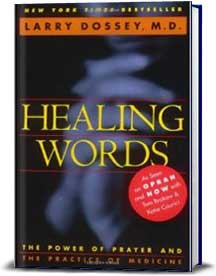 Physician Larry Dossey provides the first in-depth look at the empirical evidence for the distant effects of healing intentions, often referred to as prayer in religious traditions, and as caring, love, and compassion in secular areas. He examines experiments in both humans and non-humans, including microbes, plants, and chemical reactions. The impact of this book in medical education has been extraordinary, inspiring the majority of U.S. medical schools to add this body of inquiry to the medical curriculum. Dossey develops a view of consciousness that is nonlocal -- mind unconfined to specific points in space and time.

Physician Dossey (Medicine and Meaning, 1991, etc.) continues to probe links between medicine and spirituality in this popular study of the healing power of prayer. Prayer heals? Hardly news in the religious world, where Hebrew Bible and New Testament alike attest to prayer's medicinal effects. But for science, it's a revelation, one confirmed by dozens of laboratory experiments that Dossey cites. Prayer can help with high blood pressure, asthma, heart attacks, headaches, and anxiety; moreover, it can alter enzyme activity, blood cell growth, and the germination of seeds. Dossey rejects the traditional Judeo-Christian notion of prayer as a relationship to a transcendental God, offering instead his own quasi-pantheistic view of prayer as a ``genuinely nonlocal event'' directed to the ``Absolute'' in all things. In any case, prayer apparently works: Even unconscious or dream prayer, it seems, can be effective. At the same time, prayers often remain unfulfilled, and Dossey blasts New Agers for preaching that illness is the patient's fault and that physical health always reflects spiritual health, pointing out that many saints have suffered from terrible physical or emotional maladies. An attitude of reverence and optimism is the best approach, he says, to spiritual and physical well-being. Not likely to sway hard-core materialists, especially when Dossey dips into the deep end by asserting that patients can rewrite their medical histories by ``intervening in subatomic processes in the past.'' Nonetheless, this raises new questions (Should you ask permission before praying for someone else? Should a physician pray for his patients?) about an old but little-studied phenomenon.
- Copyright ©1993, Kirkus Associates, LP. All rights reserved. 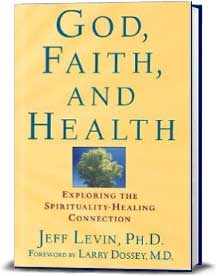 Social epidemiologist Dr. Jeff Levin founded the medical-academic field now called "the epidemiology of religion," which demonstrates that religious involvement is a significantly correlated with health and well-being. Levin's research shows how religion's emphasis on healthy behaviors and supportive relationships influences overall health, and how the optimism and hopefulness of those who profess faith promote the body's healing responses. This book is an important contribution in overcoming the traditional barriers between spirituality and health.

"Jeff Levin writes with incredible clarity, style, and passion. This book is a must read for anyone interested in the religion-health connection, especially those wondering if such a connection exists at all."
- Harold G. Koenig, M.D., Associate Professor of Psychiatry and Medicine, Duke University Medical Center, and author of The Healing Power of Faith

"A masterpiece for this exciting and challenging time of transformation . . . a beacon to all seeking to understand the connection between faith and health and our connection to the divine."
- Elaine R. Ferguson, M.D., author of Healing, Health, and Transformation: New Frontiers in Medicine

"Beautifully written and packed with compelling scientific evidence for the spirituality-health connection . . .With the precision of a scientist, the courage of a true pioneer, and the artistry of a storyteller, Levin reminds us of what we can no longer afford to ignore: that our spiritual life matters mightily to our health and well-being at every level."
- Janet F. Quinn, Ph.D., R.N., Associate Professor, University of Colorado School of Nursing

The Energy Cure: Unraveling the Mystery of Hands-on Healing

By William Bengston and Sylvia Fraser 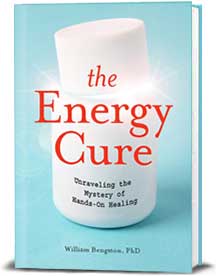 Drawing on his 30+ years of research into anomalous healing, Bill Bengston's book challenges us to rethink what is possible in medicine and healing, taking us through his own adventure of discovery. Through ten controlled animal experiments conducted at five university laboratories, Bill found that mice could be completely healed of cancer using a simple hands-on healing technique. He also investigated assorted correlates to healing such as geomagnetic micropulsations and EEG harmonics and entrainment, which further confirmed and deepened the mystery. Though initially skeptical of the astounding results he was seeing, eventually the accumulation of clinical and experimental evidence simply overwhelmed his own disbelief. Regardless of what anyone else might conclude, the rigour of Bill Bengston's research makes the evidence difficult to dismiss.

Praise for The Energy Cure

"Very infrequently, a scientist comes along whose work leads to a quantum change in the quality and significance of research in some field. Such a scientist is William Bengston, who is responsible for such a change in the recondite field of anomalous healing. His results are so extraordinary as to eclipse all previous work in that field. Bengston would be a prime candidate for a Nobel Prize in Alternative Medicine, if such an award existed."
- Peter Sturrock, emeritus professor of applied physics, Stanford University