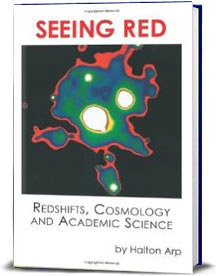 The assumption that cosmological redshift corresponds to the recessional velocity of distant stellar objects lays at the foundation of big bang cosmology, the expansion of the universe, dark energy, dark matter and other widely accepted theories. If this assumption were proven false, it could transform astronomy dramatically and shift our collective conception of the universe. In Seeing Red, Dr Halton Arp aims to do just that, sharing observations from his many years as a distinguished astronomer and showing that extragalactic redshifts are not caused by an expanding universe. As might be expected, Dr Arp met with stringent opposition after proposing such "sacrilege", which threatened dearly held beliefs. What he suffered at the hands of his fellow astronomers as a result, which has fostered many comparisons to Galileo, is a topic Dr Arp also discusses. Are academic scientists simply fulfilling their skeptical duty, or are they, in a very human way, Seeing Red?

"This book lays down a lifetime of seeing the world differently, looking at alternative explanations for a complex, beautiful universe."
- Sky & Telescope, June 1999

"You will very likely come away doubting what you thought you knew of the large-scale structure of the universe."
- Tom Van Flandern

The Trouble With Physics

The Rise of String Theory, the Fall of a Science, and What Comes Next
By Lee Smolin 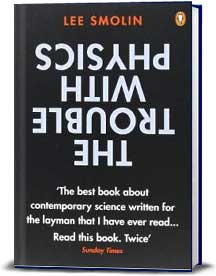 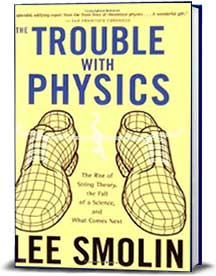 In this stimulating book, Smolin argues that physics is losing its way in a plethora of untestable theories and speculations, such as superstring theory, which have come to dominate the field; young physicists are often penalized for following other paths of exploration.

"A splendid, edifying report from the front lines of theorectical physics . . . A wonderful gift."
- The San Francisco Chronicle

"An uncommonly clear and confident account . . . Even those who differ with many of Smolin's contentions can applaud his bringing physicists' anguished night thoughts into the clear light of day."
- Tim Ferris

"If you want to think in new ways about the interconnected universe around you, read Lee Smolin's provocative, inspiring book."
- Margaret Geller

Time Reborn: From the Crisis in Physics to The Future of the Universe 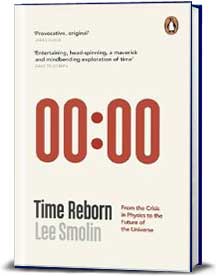 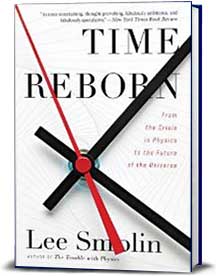 Smolin argues that physics and cosmology are trapped in insoluble dilemmas by viewing the universe as governed by timeless laws, with time as an illusion. He shows that by treating time as real, the laws of nature can be seen as evolving; indeed they are more like habits than laws. What has happened in the past affects what happens in the present through what Smolin calls "the principle of precedence."

"This is a Big Idea, and one with ramifications ranging from the Big Bang to the end of the universe.... The main thread of the argument...is easily grasped, and stands as a provocative challenge to the present state of what we think we know about the universe."
- Quill & Quire

"Time Reborn is the result of [Smolin's] most ambitious quest to date: He wants to get time flowing again.... It is incumbent upon us to occasionally step back and challenge our assumptions; to ask the very deepest questions we can articulate about the nature of the universe and our experience of existing within it.... Smolin is one of just a handful of thinkers who is up to that challenge."
- Dan Falk, The Globe and Mail

"[Smolin's] argument from science and history is as provocative, original, and unsettling as any I've read in years. It turns upside-down the now standard view of Wells, Minkowski, and Einstein. It contravenes our intellectual inheritance from Newton and, for that matter, Plato.... Smolin's argument develops slowly and builds suspense. The reader starts to wonder whether the lady being sawed into pieces will come out of the box alive.... The scientific case he makes is intricate."
- James Gleick, The New York Review of Books

"Smolin assembles ingenious arguments that the time-is-real version is the fundamental one, bypassing string theory, and explaining built-in aspects of our universe that science cannot otherwise address.... I suspect we're getting a peek here at what the cutting edge of physics a few decades from now is going to look like."
- The Boston Globe

"Smolin makes a compelling case.... For time to be 'real,' in Mr. Smolin's sense, it cannot be relative. But nor can it be absolute in the Newtonian mould, where the future already exists, by dint of inexorable logic. This leads Mr. Smolin to some audacious ideas. He challenges not only Einstein's relativity, but also the very notion of natural laws as immutable truths."
- The Economist

"The strongest dose of clarity in written form to have come along in decades. The implications go far beyond physics, to economics, politics, and personal philosophy. Time Reborn places reality above theory in stronger and clearer terms than ever before, and the result is a path to better theory and potentially to a better society as well. Will no doubt be remembered as one of the essential books of the 21st century."
- Jaron Lanier

The Fourth Phase of Water: Beyond Solid, Liquid, Vapor 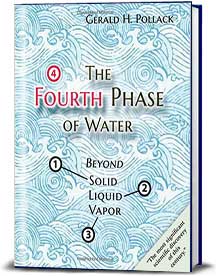 An astonishing reinterpretation of many familiar phenomena, and an excellent summary of recent research on the properties of liquid-crystalline water. Pollack includes many stimulating "out-on-a-limb" speculations.

"In The Fourth Phase of Water, Gerald Pollack offers an elegant new theory of water chemistry that has profound implications not only for chemistry and biology, but for the metaphoric foundation of our understanding of reality and our treatment of nature."
- Charles Eisenstein, Read Full Review: The Waters of Heterodoxy

"The most informative, eye-opening, mind-blowing book that I ever recall reading."
- Henry Bauer, Dean Emeritus, Arts and Sciences, Virginia Tech

"The most significant scientific discovery of this century. What strikes me above all is the elegant simplicity of [Pollacks] experimental approach."
- Mae‐Wan Ho, Director, Institute of Science and Society, London.

"Dr. Pollack is one of the pioneers in this field, and his discoveries can be expected to have important implications."
- Brian Josephson, Nobel Laureate, Cambridge University.

The Non-Local Universe: The New Physics and Matters of the Mind

By Robert Nadeau and Menas Kafatos 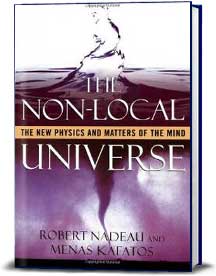 Classical physics states that physical reality is local, or that a measurement at one point in space cannot influence what occurs at another, distant point. However, since 1990s experiments have been conducted in which subatomic particles, traveling in opposite directions, respond simultaneously: when a change is made in one of them, the other changes instantly and to the same degree, even though they are separated by meters to miles. These results indicated that the particles are "entangled" and that they communicate with each another instantly "in no time." The revelation is that physical reality is non-local --a discovery that historian Robert Nadeau and physicist Menas Kafatos view as "the most momentous in the history of science." The authors explore the implications of non-locality, including its relevance to that most remarkable aspect of humanity: consciousness itself.

"Nadeau and Kafatos supply plenty of food for thought: the apparently recondite concept of non-locality, they suggest, has consequences everywhere."
- Publishers Weekly 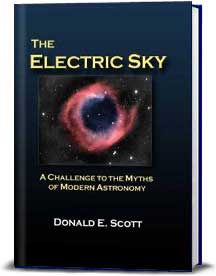 A heretical take on astronomy and cosmology, providing a very interesting alternative to the orthodox "gravity-only" model, with an emphasis on plasma physics, vast electric currents, and a reinterpretation of quasars, galaxies and solar physics.

"I really love this book. It is causing me to rethink a great deal of my own work. I am convinced that The Electric Sky deserves the widest possible readership.... I felt genuine excitement while reading and felt I was delving into a delicious feast of new ideas."
- Gerrit L. Verschuur, PhD, Physics Department, University of Memphis

"You don't have to be an astronomer to enjoy this book. It's an exciting story about how a small group of physicists, engineers and other scientists have challenged the establishment, the big science astronomers who are reluctant to listen to anyone outside their own elite circle."
- Lewis E. Franks, PhD, Stanford University, Fellow of the IEEE (1977), Professor Emeritus and Head of the Department of Electrical & Computer Engineering, University of Massachusetts (Retired)

"It is gratifying to see the work of my mentor, Nobel Laureate Hannes Alfvén enumerated with such clarity. I am also pleased to see that Dr. Scott has given general readers such a lucid and understandable summary of my own work."
- Anthony L. Peratt, PhD, USC, Fellow of the IEEE (1999), former scientific advisor to the U.S. Department of Energy and member of the Associate Laboratory Directorate of the Los Alamos National Laboratory